He told me that during the depression, it wasn’t about just your survival; it was about everybody trying to get through it together. If a stranger came to your door in need of food, they would simply water down the soup to make it go farther.  It was the right thing to do.

If he saw me buying a case of bottled water, he’d roll over in his grave. (Although in my defense I refill them numerous times, and make my kids) He’d ask me what’s wrong with tap water, or water from the hose, or drinking fountain, and he would be right. More than 60 million plastic bottles end up in US landfills EVERY DAY – about 22 billion last year alone.

Disposable cameras, disposable cell phones, paper towels, at what point will we realize enough is enough.

My dad’s generation used a single straight razor for decades until they invented the safety razor that used replaceable blades. Now we have throwaway razors with four blades for a “closer” shave. Kids shoes have LED’s with batteries in them. The only thing my dad would ask is, why?

My dad’s generation used cloth diapers. They were softer and better for you, and didn’t end up tossed out the window like so many we see today littering the countryside. It is estimated that 27.4 billion disposable diapers are consumed in the U.S every year. Over 50 pounds of petroleum products, 300 pounds of wood and 20 pounds of chlorine are needed to produce disposable diapers for one baby EACH YEAR

These aren’t just huge numbers, these are staggering numbers. While many of the disposable products are touted as “convenient”, my dad would ask the obvious “at what price”?

Having traveled extensively inMexicoandCentral America, I’ve seen hundreds of children and adults rummaging through a single dump to salvage plastic bags for seven cents a pound, (That’s hundreds of bags). I’ve seen three generations of one family, sixteen in all, living in a black plastic and stick structure, with no running water, electricity and a dirt floor. And they were the norm.

We live in the most blessed yet conversely the most wasteful society in history and we wonder why we are facing enormous problems. Unfortunately, decades of disposable and careless habits have caught up with us. Overflowing landfills and pollution are just a sampling of what’s to come.

Take nothing for granted. Use everything as much as you can. Rethink essentials. Enjoy what you do have. Recycle everything possible including furniture and clothes. Use disposables longer than they’re meant to be used, especially razors (But not diapers). Refill water bottles.

Challenge yourself to make more from less and new from old.

Life’s little pleasures are the most affordable ones.

These are tough times, and they are  going to get worse. Perhaps the best thing we can do as a society facing troubling times is to look back at how our ancestors dealt with the depression, and learn from them. They weathered tough times with dignity, grace and compassion. Why should we do any less?

Straightening bent nails really isn’t a bad idea, and thanks to my dad, we do it here at the recycle ranch. 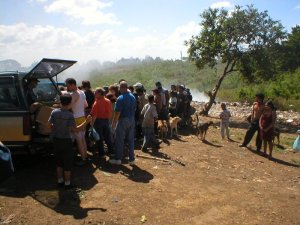 Dozens of people that sift through rubbish at the dump line up for bags of rice and beans, some candy and toys. Many of these people live in the crypts at the cemetary next door.

In an impoverished nation, absolutely nothing of value gets discarded until it is no longer useable. If they could go through an American landfill, they would be shocked at what we throw away. 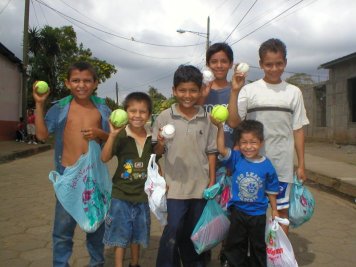 It’s all in what you have. To these boys, the balls were one of the best gifts they had ever received. Our idea of poverty and the harsh reality of genuine poverty are two different things.